This is a technical description of Confluence's Bandana caching mechanism. It is primarily designed for Confluence developers, but published here because it might prove useful to some plugin developers.

For an overview of all of Confluence's persistence mechanisms, see Persistence in Confluence.

Confluence's Bandana subsystem is used for persisting configuration settings for Confluence and its plugins. Any persistence mechanism requires careful thought with regard to updates. Transactions are the main mechanism for controlled updates to shared data, and it's important that transactions are treated consistently across all the subsystems involved.

Confluence 2.3 has moved Bandana data to the database in order for it to be shared among clustered nodes. Using Hibernate meant that the updates done to the database were immediately transactional, but the Bandana caching layer still needed to be updated to be transaction-aware.

The caching layer for Bandana is necessary because all the data is persisted as XML. When configuration objects are retrieved from the data store, they are deserialized back into Java objects via XStream. This deserialization occurs after the XML has been retrieved by Hibernate, and is a time-consuming process. Because Bandana objects are used so frequently (at least one per request), a cache of configuration objects, independent of the Hibernate cache of XML, is required.

The interaction between the key components in the Bandana caching system is shown in the flowchart below. 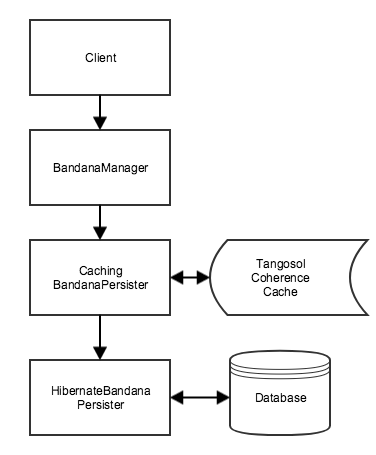 As you can see from the diagram, the CachingBandanaPersister is solely responsible for reading and updating the cache, only delegating queries to the HibernateBandanaPersister when the required data is not already in the case.

Having a cache separate to your transactional data store (Hibernate) presents a few tricky problems:

None of these problems is insurmountable, but the solution is fairly complex. The Bandana caching in Confluence 2.3 will have the following features:

These features are provided by a Confluence transactional cache, which is described in detail below.

These two components collaborate with Spring for transaction management, and the locking and caching subsystems in Confluence.