This page provides more information about AMPS. You won't normally need to use AMPS directly, since the Atlassian Plugin SDK wraps AMPS commands with its own script-style commands. However, in some cases you may wish to invoke AMPS commands directly or specify configuration settings for AMPS, which you can do in the project POM. 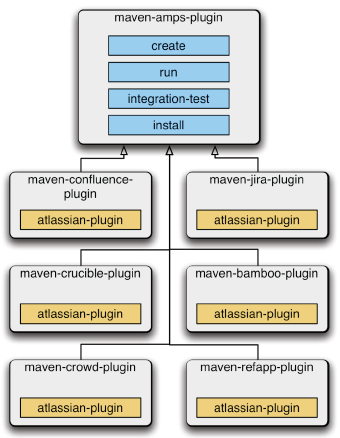 The application-specific configuration is as follows:

The commands are of the form mvn APPLICATION:CMD, where:

This section describes how to run the following commands:

Running a Plugin in an Application

Say you wanted to run an arbitrary plugin in Confluence. Simply go to the plugin's project directory and type:

Specifying a Version of the Application

Say you wanted to run your plugin with Confluence 3.4:

Say you want to run your plugin with JIRA 4.2:

Say you wanted to run that plugin but with Confluence 3.4 and Tomcat 7:

Running your Plugin in Debug Mode from your IDE

Say you wanted to run that plugin in debug mode from your IDE. Set up a configuration in IDEA that executes from the project directory:

Say you wanted to write a new plugin for Confluence, with integration tests, but wanted minimal POM XML and you do not want to have to extend any other POM:

Say you had a Refapp plugin but wanted to run your integration tests against Confluence:

Running your Plugin in Multiple Applications

Say you want to run the plugin in multiple applications simultaneously. In three separate tabs in your terminal (command window), type:

You can now test your plugin on three applications side by side in your browser. This also means you can upgrade your plugin simultaneously:

The CLI command, a feature of the bundled Maven CLI plugin, allows you to work with Maven through an interactive command line.

In this mode, Maven remains in a running state, so that you can enter commands interactively. This saves time for JVM startups between running commands.

To put Maven into CLI mode, run this command from the project home directory:

After a few moments, the CLI prompt appears:

From there, you can enter Maven commands as usual. For a list of available commands, enter help at the prompt.

Specifying a Version of AMPS